Why it’s okay when you end up with one 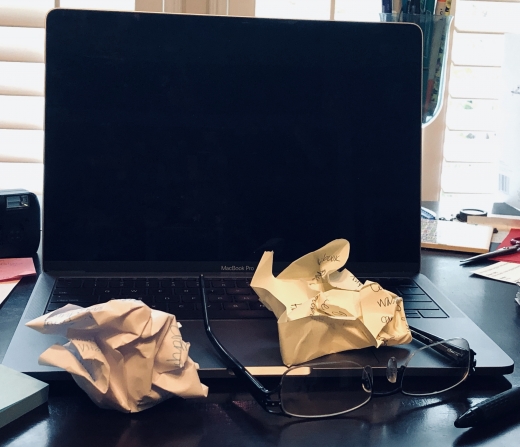 I’ve stolen this phrase from the first book I read about writing that got me excited to be a writer. Bird by Bird by Anne Lamott left such an impression on me that it still sits on my reference books shelf. It was a revelation, getting to this specific chapter. I felt vindicated when she told me that, “all good writers write them,” because I’ve had some terrible first drafts. Before Anne, I’d stare at them in desperation, convinced this was the best I could do. My writing wasn’t going to get any better, and I’d be left with, well shit.

It was the panic of inexperience and the need to have instant gratification with my work talking. Of course first drafts are shitty. As Anne says, shitty first drafts are what allow you to have, “good second drafts and terrific third drafts.” And, it’s true. Who really gets everything right their first time around?

Once you get over the heartbreak of your first draft, you need to think about your process. Revisions are a given, but is there anything you can do at the outset to get your first draft to be less shitty? For me, this took a while to think through, since my first impulse is to mull over an assignment in my head before going straight into writing. This often made my first drafts very disjointed. To address this, I decided to add in an extra step. I now begin each writing assignment with a set time for research. As I’m researching, collecting sources and quotes, and learning about my topic, I take particular time to notice patterns in my information. My final step when my research is done, is to map out my piece with the subheads I plan on using throughout the copy. I actually did it for this piece, writing the intro you see above, in a shorter form, first and then three subheads directly below. The process works, even when I’m writing for myself.

Your process may be different, but I found that being thorough with my notes from the start, then doing a preliminary outline made a huge impact. I also sit on my notes for a day, without writing, in order to let what I’ve just learned come together in my head. It saves me time when I do sit down to write, and at least leaves me with a relatively organized first draft.

Of course, a major component to repairing a shitty first draft is the editing. This can consist of a few quick-fixes to shuffling entire paragraphs around within a piece. Regardless, it takes time. If you’re writing your first draft right up to your deadline, you won’t have the time to transform your shitty first draft into an exemplary piece of copy. That makes you look bad. Always leave time for editing. I try to finish my first draft at least a day before the content is due. I try to let my first draft sit for at least a few hours before I tackle draft number two. I make sure to read slowly to avoid my brain auto-correcting things that are really wrong, and I try to watch for the mistakes I commonly make. I tend to overuse the same words too closely together, and am sometimes too sparse on my commas. Being able to complete the editing task at your own pace, without rushing, makes all the difference.

Laugh at the crap

I just flew home from a family vacation. It was a cross-country flight, so I had plenty of time to work, read, and even take a little nap. It was great. I only had one assignment to complete on the way home, and although I felt a little drowsy, wrote it out. I reviewed the draft again the next day to begin my editing process, It really sucked. In my in-flight haze, I’d made a mess of typos, some of which had turned into words that made absolutely no sense. I had disjointed paragraphs and sloppy sentences. It was the epitome of a first draft. I couldn’t believe I’d actually written it the day before, so I did what any writer should do. I looked at the screen, laughed at how bad the piece was, and dived into work on draft number two. After all, it was just a first draft.

*Content from Bird by Bird quoted in piece taken from: https://wrd.as.uky.edu/sites/default/files/1-Shitty%20First%20Drafts.pdf