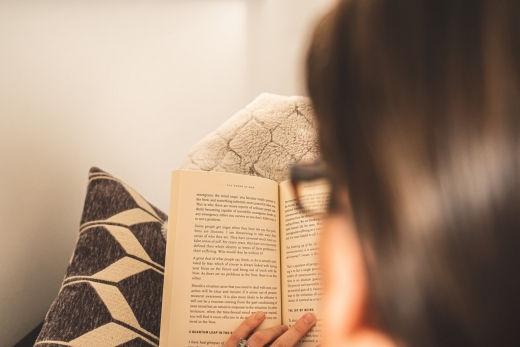 The pandemic changed a lot about everyone’s day-to-day. Working from home was a big shift for many, and it easily meant more hours answering emails and getting projects done.

As someone who’s worked from home in one capacity or another for the last eight years, spending more time at home hasn’t been that much of a disruption to my schedule. In fact, being able to devote less time running around even created more time for me to get work done.

This has had an unforeseen, positive side effect. I’m reading more.

My year in books by the numbers

In 2019, I read 19 books. The standouts were Station Eleven by Emily St. John Mandel and Where the Crawdads Sing By Delia Owens. The rest of that year was full of book club selections, silly science fiction, and all the things I like to read but that often underwhelm.

In 2020, I read 29 books. That’s almost like adding one more book per month. July was my best month, clocking in about one book per week.

It never felt like I was reading more, or reading faster, but I definitely know I looked to books as my way to zone out. When I needed to get away from the noise, confusion, and to-do lists of the day, a book was my refuge. Sometimes Netflix worked too, but reading meant quiet time, and I needed a lot more of that this past year too.

I read a lot of fun books in 2020, crossed many genres. These were my favorites.

The Dutch House by Ann Patchett

A book club book, this made it onto my radar because David Sedaris recommended it. It’s a book about a family that breaks and never fully repairs. It’s about what happens to the children when their reliance on each other overshadows observations about the world around them. There’s also the house, which is at times more of a character than some of the people. It’s a complete story that leaves you feeling fulfilled as to where the characters went and what they had to endure.

The World That We Knew by Alice Hoffman

A favorite author of mine, I enjoy almost everything Hoffman writes, but this book was a little more personal because of its religious themes. Taking place during WWII, the story focuses on a set of children dipping their toes into adulthood. They’re in Europe, where so much is changing and so much is scary. Each takes their own journey, gets involved in the war in their own way. Focused less on the fighting and more on the personal struggle of finding your way during this sad period in history, it’s a beautiful story full of love amidst hate and good among evil.

Things in Jars by Jess Kidd

Every once in a while, I want a book that’s a little gothic in nature. Think the dark and dirty underbelly of London just at the turn of the century. This book delivers all that and more as a female detective investigates the kidnapping of a young girl. There’s murder, scientific experimentation, a ghost, violence, and more. It’s action-packed and very exciting, almost like reading a movie. This one was fun and different.

Fleishman is in Trouble by Taffy Brodesser-Akner

It’s not every day you get a book about a man’s midlife crisis that you can relate to, but this book pulls it off. Toby Fleishman is recently divorced from a woman who seems as unreliable a parent as any deadbeat dad stereotype you’ve seen elsewhere. Of course, it’s more complicated, but what isn’t complicated is Toby’s reentrance into the dating world. His life is a mess, but if he can get control of it, he’s going to be just fine.

Oona Out of Order by Margarita Montimore

Time travel is always a fun theme in a book, but usually it comes paired with some heavy science fiction. Not the case here. Oona simply lives her life out of chronological order. She gets to a new year, and is a new age. Her body changes, but her mind is aging sequentially. This means she’s often confronting an ethical dilemma — what to tell her future self and what mistakes to let her live over again. What about her future can she change when she lived it in the past? It’s a complex story full of all the normal nuances of aging. It’s a good book because it’s unique.

The Dante Club by Matthew Pearl

This was one of my more literary reads for the year. Yes, it’s also a murder mystery, full of intrigue, but at the heart it’s about the power of literature and those who want to defend it. The book also takes place in Boston, my favorite city. The great minds of Oliver Wendell Holmes, Henry Wadsworth Longfellow, and James Russell Lowell have come together to translate Dante’s Inferno. During this arduous task, a mass murderer is targeting people in the style of the gruesome punishments within the text. Will this team find out who the killer is before they strike again? This is the first book in a series, and I’m looking forward to the next one.

I loved so many of the books I read in 2020, and have reviewed each one in my blog Gsquared Lit Review. I’m also happy to say that 2021 is already proving to be another book-laden year. I knocked out three titles in January and am on my third February book with two more reading weeks to go. It’s going to be another fun year of books, and I wouldn’t have it any other way.

Photo by Castorly Stock from Pexels